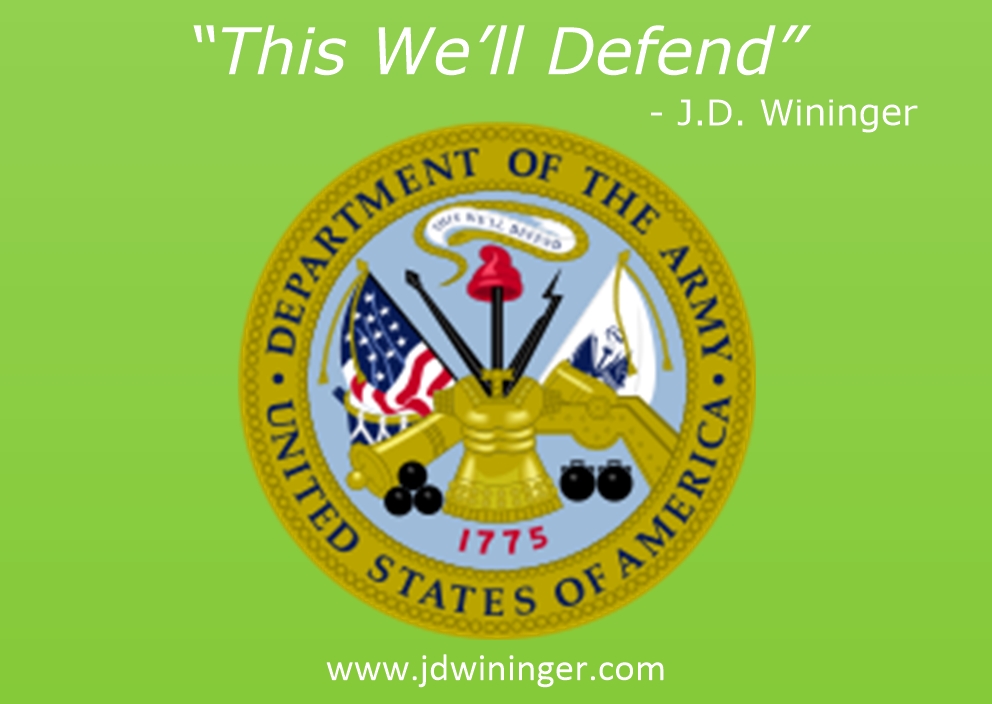 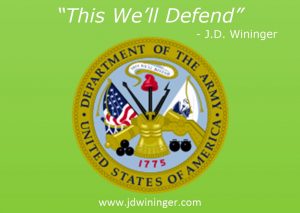 Three small words. Individually, they seem harmless; but when combined, they become a call to action that men and women have been willing to die for. I first learned the motto for the United States Army many years ago. I was in the 9th grade and enthralled with the military history I was learning in JROTC. Like nearly every young man of my generation, I dreamed of one day becoming a soldier and wearing my nation’s uniform. I imagined glorious campaigns, acts of heroism and bravery, and standing proudly before our nation with a chest full of medals like Audie Murphy. Four years later, I began living out the motto “This We’ll Defend.” I’ve never stopped.

According to Reference.com, the War Office (formed to manage the Continental Army) adopted this motto in 1776. Each word in this motto is meaningful. “This” refers to the United States of America, its Constitution, and the liberty it provides. “We’ll” references the collective team effort of the Army; we act as one. “Defend” reminds us that the primary purpose of the Army is as a defender of this nation, not as an aggressor to other nations or its people.

Few notice the three small words in the banner encircled by a rattlesnake atop this emblem. Fewer still ever consider what they mean. For this old soldier, they are more than a rallying cry; they are a promise I have sworn to keep. Proudly American, I’ve spent my adult life attempting to portray the ideals our nation was founded upon; liberty, equality, opportunity, due process of law, and freedom. Having traveled much of this world, and observed firsthand the many forms of government man has created, I can assure you, none compares to the United States of America.

As with all things formed by man, even a nation based on God’s principles for living morally, they crumble and disintegrate. As 2 Chronicles 7:14 promises, God can restore a repentant nation. However, just as Jeremiah prophesied to the nation of Israel (Jeremiah 18:8), failure of the entire nation to repent leads to God’s judgment upon that nation. Our nation is fast approaching this point.

We can debate the causes for the events happening in our country today. They are as endless as the grains of sand on a beach. The best result we humans can hope for from any such deliberation is to “agree to disagree.” It is my opinion that many in our nation today are deceived and divided by Satan. In my youth, we weren’t “hyphenated” Americans, we were American. Yes, lots of ethnicities, colors, only two genders. What brought us together as a nation (and made us the greatest nation in the world) was our morality, desire to live free, and willingness to work to better ourselves and those around us.

In these politically and socially charged times we find ourselves in today, the world is forcing us to choose sides. It says we must be “Woke-American”, “African-American”, “Mexican-American”, “Asian-American”, “Somali-American”, or many other man-defined differentiators. Does anyone else notice what’s wrong with all these descriptors? America comes last in every single one of them.

Recently, I posted on social media that if I have to define myself as a hyphenated-American, I choose “Christian-American.” This is the only designation I’m willing to accept as an American citizen, because it denotes that I put my Christian faith first in my life. Our nation founded upon Christian principles. Many want to disagree with those facts; and no matter how many changes you make to history books through “Cancel Culture”, you cannot erase truth.

Looking around my nation, I see open rebellion against Christianity in the halls of Congress, state governments, courts, and in our schools. In John 15:18 (NKJV), Jesus stated, “If the world hates you, you know that it hated Me before it hated you.” Persecution of Christians has been going on for centuries, so we shouldn’t be surprised. My sorrow stems from the fact that we have done this to ourselves. As a Christian America, we’ve stood by for decades and removed God from schools, courts, and our government. We did so in the name of political correctness, with an unwillingness to stand up and defend what we believe.

The people Satan controls driving this agenda of division and hatred are not silent. They don’t stand idly by and do nothing. They are the very activists who bring lawsuits, apply public pressure, write letters, and tirelessly work to remove all things God from the public eye.

If we Christians continue to give ground on this, we will one day face Christ’s judgment for our non-action. Every Christian-American must defend our beliefs and Stand Up for Christ if we hope to restore our nation so it may once again receive God’s blessing and live in peace.

The question many of you have right now is, How can I Stand Up for Christ and defend my Christian beliefs? I can’t tell you a surefire approach that works every time. Know that trying to talk, yell, or scream louder than those who oppose you will only make you ineffective and hoarse.

I want to encourage you to have the power of soul in times of great stress and anxiety like these to not just endure this evil day, but to be joyful. It’s critical that we fill our lives with the fruits of righteousness as Paul described in Philippians 1:11. We Stand Up for Christ in the way we live our lives; through our deeds of kindness, projects of mercy, and labors of love.

I close with one last question I pray you’ll consider; Will you Stand Up for Christ today?

Please join me each Thursday evening at 9:30 Eastern as host Coach Mark Prasek and I take a trip Around the Cross-Dubya. We discuss this week’s blog post, offer insight about the lessons learned, and enjoy the fellowship of friends in the live chat room.

38 thoughts on “This We’ll Defend”