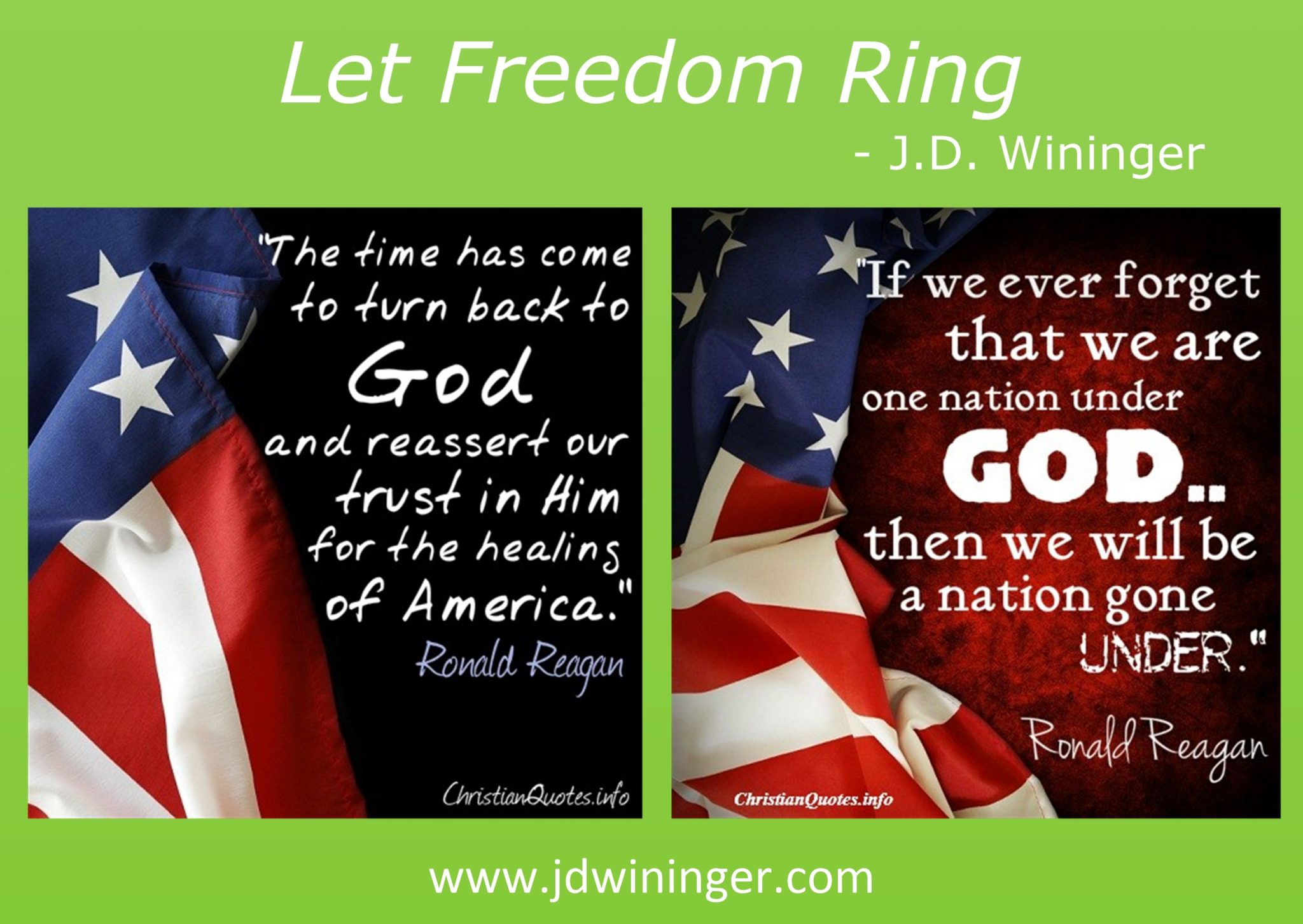 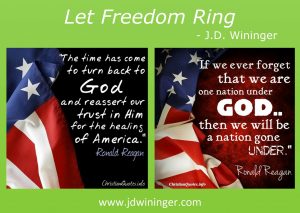 As we prepare to celebrate America’s Independence Day, many of us are looking forward to time spent with family and friends. Be it a cookout, camping, day at the beach, or just fishing along a lazy, quiet river bank. At some point our thoughts will, and should, turn to our freedom. I encourage my fellow Americans to take just a few moments and consider what that seven-letter word means to you.

For me, the word freedom has several meanings. Foremost, I remind myself we founded our nation upon our desire for freedom of religion. This freedom enables Americans to worship our holy, triune God and live according to His word, without fear of reprisal or confinement. Second, I think of our veterans; some of whom over the past two centuries, like Christ, laid down their lives—sacrificing themselves for our freedom. Last, I think of and praise God for the many freedoms I have as a Christian.

As a Christian, I have cherished freedom in Christ. In that freedom, I was set free from my sin. I can be free from fear and worry; and I am freed from death because my God promises eternal life in heaven. I recognize though, all freedoms come at a cost. We must all die to ourselves and our selfish desires to find true freedom in Christ. I think often of the words of the Apostle Paul in Galatians.

“I have been crucified with Christ; it is no longer I who live,
but Christ lives in me; and the life which I now live in the
flesh I live by faith in the Son of God, who loved me and
gave Himself for me.” Galatians 2:20 (NKJV)

I love my country, having served it both in the military and as a responsible citizen. As I’ve grown older, I’ve seen lots of changes in our nation. Much of our American technological and medical advancements came from our freedom to explore and challenge preconceived notions of the world. These capitalist-funded advancements benefit all mankind. I’ve also seen the Christian values, morality, and principles our great nation was founded upon eroded during my lifetime.

I have watched with great sadness as the secular world has worked to take what was once deplorable, immoral, and ungodly (e.g. homosexuality, abortion, removal of God from the public eye) and turn it into acceptable behavior by society. Don’t think so? Planned Parenthood® didn’t exist to promote abortion until October 1916. The U.S. Supreme Court removed prayer from public schools in 1962. In 2015, the government enacted laws to force legalization of gay marriage in the U.S. These laws can never usurp God’s law, written on my heart.

In his speech at Western Michigan University in December 1963, Reverend Martin Luther King Jr. stated “Morality cannot be legislated, but behavior can be regulated. Judicial decrees may not change the heart, but they can restrain the heartless.” His statement was correct, albeit used in a different context. He was leading the civil rights movement in our nation. He later stated that we must change our hearts for us to once again become a moral nation. Sadly, legislation has moved in the opposite direction of his plea. Reverend King wanted our nation to move closer to its founding tenets. A large portion of society wants us to move away from our Judeo-Christian foundation.

We can, and must, protect the weakest among us. We must not destroy religious liberty and freedom in doing so. God made man with freedom of choice. Let no man ever remove that choice from another. I pray no one suffers eternal damnation, but I’m realist enough to know many will, by their choices.

President Ronald Reagan was one of my Commanders-in-Chief during my time in the military. Above are his two most memorable quotes for me. He reminded us how our country was blessed by the grace of God. He stated that should we continue down the secular path many in our country seem to be driving towards, we risk losing God’s favor. We risk this because we will no longer honor God by following His commandments and examples of Christian living found in the Bible.

As a Christian, I will always endeavor to earn God’s blessing on my country. Should I ever have to make a choice between being an American and being a Christian, know I made that choice many years ago. I made it when through faith in Jesus Christ, with God’s immeasurable grace, I gave my life to Him.

While I humbly pledge my allegiance to our flag for the sacrifice of so many for our freedom, my first allegiance is to my God. I will stand and defend my Christian faith at all costs, against all enemies, both foreign and domestic. Of these enemies, the greatest is Satan.

I stand at the cross, girded in the Armor of God, ready to defend my faith. Click To Tweet

Freedom in Christ is true freedom; for God meets our every need. He will never leave or forsake us. Until you understand and accept Him as Lord and Savior, you remain in bondage to sin, shackled by many chains. If you have not done so already, give your life to Jesus today and break those chains.

Tomorrow is not promised, so please do so today. Find real freedom through Christ’s salvation. For those of us who are truly free, stay strong and finish your race.