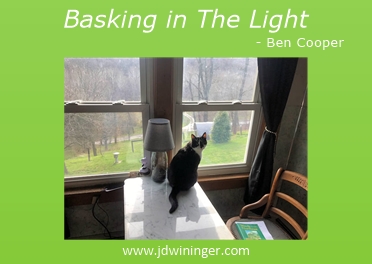 This week, it is my great pleasure to introduce you to a friend, mentor, Christian writer, fellow agrarian—and most importantly, Christian brother and faithful prayer partner. I playfully yet respectfully call him “The Honey Man” as you’ll come to understand from his bio; although his sweet disposition does have a lot to do with it. Please welcome my guest this week, Mr. Ben Cooper. 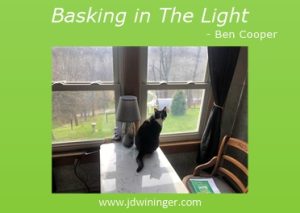 Raising five children in our small, cape cod house made for tight quarters. As the kids grew older, we were always jockeying around for space. It wasn’t possible for each of the kids to have a room of their own. The older ones got their own rooms and as they grew up and moved out on their own room swaps happened about the same time span as the difference in their ages.

As we inch closer to becoming empty nesters, space is more readily available. Our oldest daughter got her upgraded space, allowing me to renovate her old bedroom into my new office. My wife, Sonia, wanted me to make my old office into a breakfast nook. That area has double windows that overlook the yard, pasture, and eventually the Eastern Continental Divide. It gets all the afternoon and evening sunlight.

Sonia found an antique Victorian marble-topped table with matching chairs that became her Christmas gift. No sooner had she settled in to enjoy her new space, when she realized she was in competition for that same spot every afternoon. As the sunlight lit up the marble surface of the table each afternoon, our resident feline decided that was her space. If you have a cat, you know exactly what I am talking about. They seek out the best sunspot in the house and curl up there. I think she and the cat have worked things out. Sonia takes the early morning shift for reading and doing her morning devotions and “Mouser” get the afternoon shift for basking in the sun.

The attraction for that sunspot recalled an admonition from the Lord that invites us to bask in the “Son” spot.

“But if we walk in the light, as he is in the light,
we have fellowship with one another, and the blood
of Jesus his Son cleanses us from all sin.” (1 John 1:7)

That’s where we should spend the bulk of our time. Like mouser, we should crave the warmth of basking in the “Son” to prepare us for when we need to take that light into a dark and sinful world.

The very first recorded words of God in Genesis 1:3 are well known, “Let there be light.” However, not everyone who reads those words fully understands them. The “be” verb in the original language is akin to the phrase “I am” that God used to tell Moses to credit who sent him. So, we could better understand those very first words of God as saying, “I am light.” God called us from the very beginning to stay in His light. His living word, Jesus, is the light of the world.

“Again Jesus spoke to them, saying, ‘I am the light
of the world. Whoever follows me will not walk in darkness,
but will have the light of life.’” (John 8:12)

Is it any wonder that things of nature are attracted to the light? It isn’t just cats. Plants will bend their stems and branches to try to capture as much sun as they can to turn that into energizing growth. God created man with a propensity to be in the light, but mankind quickly became separated from that light and life-giving source.

Are we habitually deciding every day to bask in His “Son’s” light? #SeekLight #BeHisLight Click To Tweet

And if we are, do we take that precious light to a lost and dying world?

“In the same way, let your light shine before others,
so that they may see your good works and give glory to
your Father who is in heaven.” (Matthew 5:16)

Unless otherwise notes, all scripture quotations are from The ESV® Bible (The Holy Bible, English Standard Version®), copyright © 2001 by Crossway, a publishing ministry of Good News Publishers. Used by permission. All rights reserved.

Ben lives in the rural southern Pennsylvania mountains along the Mason / Dixon line within the shadows of the Eastern Continental Divide. He and his wife have raised and homeschooled their 5 children on this 3.5-acre farmette. Ben grew up on a family dairy farm in western Pennsylvania, obtained his Agricultural Degree from Penn State University and worked 32 years for Maryland Department of Agriculture. He is a beekeeper and teaches classes at Allegany College of Maryland. Ben only recently began writing Christian non-fiction, including being a contributing author to several Guideposts publications. He can be reached by email at cooperville@atlanticbb.net

You can find Ben’s Amazon author page, and check out some of his God-honoring works at https://www.amazon.com/Ben-Cooper/e/B07N33S7K1

33 thoughts on “Basking in The Light”